Following on from my last Chairman's Blog (read the second part of it), MyFC have now had the first round of voting as to which club they are going to take on next...and here are the results (with the other clubs names blacked out for confidentiality reasons apart from ours). 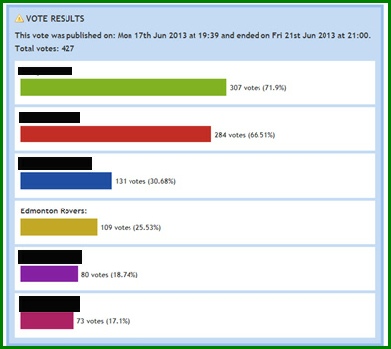 Only the first three clubs qualify for the next round of voting (which is to include another 3 or 4 clubs), so we have just missed out I'm afraid.

However, all other clubs are from the Non-League Pyramid on Saturdays and therefore 'Semi-Pro', so it was certainly encouraging to see us getting 109 votes and being well in the mix. That suggests that we may receive sponsorship offers from individual members of MyFC anyway, and there is also another possible 'big' sponsorship option that Trevor might be involved in which he may (hopefully) be able to announce when he returns from his holiday or at the AGM on Friday 19th July.

A MyFC sponsorship/partnership would have been better, but it is certainly not a disaster.